Our gun control t shirts designs feature our popular “All Those in Favor of Gun Control, Raise Your Hand” print and the classic “The Experts Agree….Gun Control Works“.

The design, “The Experts Agree…” is pretty straight forward and is a classic that has been around for years.  This design layout features the Nazi swastika, the Russian hammer and sickle and the Red Chinese Star – all symbols of oppression…and of course, gun control.

In 1933, the Nazis, led by Adolf Hitler seized power and used that power to disarm and attack political opponents and Jews.  Constitutional rights were suspended and Hitler’s police conducted mass searches and seizures of guns from all it thought were “politically unreliable”.  In the next five years, the Nazis (National Socialist Regime) “cleansed” society by putting all undesirables into labor camps and police were revoking gun licenses.  The Gestapo banned independent gun clubs and arrested their leaders. Gestapo counsel Werner Best had also issued a directive to the police forbidding Jews to have firearm permits.

In 1938, Hitler signed a new Gun Control Act which liberalized gun control for fellow Nazi party members and Jews were prohibited from working in the firearms industry and even .22 hollow-point ammunition was banned.  The Nazis then ordered the Jews to surrender all of their guns and the police even knew (through gun registration) who had what weapons.  If any Jew had a gun, they were turned over to the Gestapo.  When the Night of the Broken Glass (Kristallnacht) happened the Jews were already disarmed and not able to defend themselves against the Nazis.  This is controlling the masses through gun control. The Chief of the SS, Heinrich Himmler even decreed that any Jew possessing a firearm would have to serve 20 years in a concentration camp. And when the Nazis invaded France, any Frenchmen who did not surrender their firearms within 24 hours were subject to the death penalty. 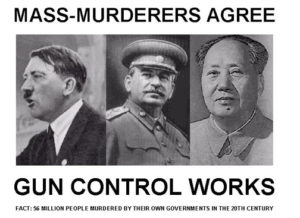 In 1918, shortly after the Russian revolution, the communist government order all citizens to surrender all guns, firearms, ammunition and even sabres.  This was done obviously to keep the people from fighting back against an oppressive government, but just like the Nazi party in Germany, the members of the Communist Party were exempt from gun control laws.

The Communist Party in Russia then issued a decree that any non-Communist possessing a weapon would be subject to a prison sentence.  When Stalin came to power, he made any possession of a firearm a crime and it was punishable by penalty of death.  Once the Russians were disarmed, Stalin was then able to carry out his reign of terror and one of history’s greatest genocides with millions of people starved to death or executed in the next three decades.

Other brutal dictatorships also have gone onto brutal genocides preceded by gun control of its’ citizens.  China under Mao Zedong and Cambodia under Pol Pot also killed millions after seizing guns from their citizens. 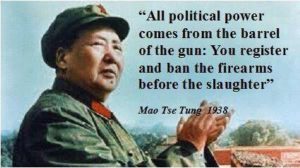 So, does gun control work?  Yes, it does.  History speaks for itself.  When you want to control and instigate mob-rule over others, then you exercise gun control before you exercise people control.  Just ask the Jews in Europe during World War 2 – who once they saw the slaughter and were able to attain guns they were able to fight back in Poland during the Warsaw ghetto uprising.  They figured it was better to go down fighting on your feet than to be gassed and burned by the Nazi tyrants.  Also, blacks in the United States were also denied gun ownership rights in parts of the deep south.  And why?  Because they too were being oppressed by others, and those who would oppress them, knew if they didn’t exercise some form of gun control, then the blacks might fight back. 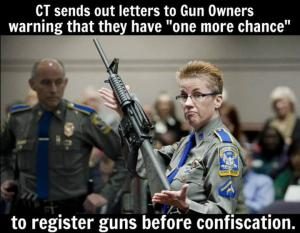 Many of our current leaders in this country want to take us down that same path of gun control practiced by the tyrants mentioned above.  We must never allow that to happen.  Look at these quotes from two of our founding fathers:

“A free people ought not only to be armed, but disciplined…”
– George Washington, First Annual Address, to both House of Congress, January 8, 1790

“No free man shall ever be debarred the use of arms.”
– Thomas Jefferson, Virginia Constitution, Draft 1, 1776

These anti-“gun control” t shirts are our best sellers.  We sell these t shirts directly from this store.  Both designs are screen-printed on 100% cotton t-shirts.  Also, these gun control designs and others can be found on various other products at our Redbubble store.  Maybe your looking for a coffee mug, or another type of t-shirt or whatever.  Our Redbubble store features different designs on all kinds of different products.  Check it out!